Structural status of HIV-1 capsid during nuclear import and uncoating

HIV-1 capsid performs essential functions during virus early replication and establishment of productive infection. The size of the capsid is generally believed to exceed the diameter of the nuclear pore complex (NPC), indicating that capsid uncoating and release of the viral genome occur prior to nuclear import. We combined 3D correlative light and electron microscopy, cryoelectron tomography and subtomogram averaging to capture the structural status of the reverse transcription-competent viral complexes in infected cells. Our data revealed that apparently intact cone-shaped capsids translocate through the NPC central channel, which is dilated enough to sufficiently accommodate the entire HIV-1 capsid. Subsequent to nuclear import, we detected mostly disrupted capsid-like structures, often lacking dense nucleoprotein complexes. Our data argue for uncoating of the viral replication complex inside the nucleus by breaking the capsid open, and not by disassembly into individual subunits.

Presented by Martin Jinek, Department of Biochemistry, University of Zurich

Prokaryotic CRISPR-Cas genome defense systems contain RNA-guided effector nucleases that have been repurposed as powerful tools for precision genome editing in eukaryotic cells and organisms. In previous studies, my laboratory revealed how the genome editor nucleases Cas9 and Cas12 use guide RNAs to recognize and cleave their DNA targets. Despite their intrinsically high specificity, these enzymes can nevertheless cleave mismatched, i.e. off-target DNA sequences, which presents a concern for their therapeutic use. By determining multiple structures of Cas9 in complexes with off-target substrates, we now show that its off-target activity is primarily enabled by the formation of non-canonical base pairs and preservation of base stacking within the guide RNA–off-target heteroduplex. These findings provide a structural rationale for the off-target activity of Cas9 and will facilitate engineering of ultraspecific guide RNA designs for clinical applications. Although the canonical function of CRISPR-Cas systems is to provide adaptive immunity against mobile genetic elements, some CRISPR systems have been adopted by Tn7-like transposons to mediate RNA-guided DNA transposition. Our recent structural work focuses on the type V CRISPR-associated pseudonuclease Cas12k and its transposase partner TnsC, showing how these proteins recognize and remodel target DNA. These studies advance our mechanistic understanding of CRISPR-associated transposons and will guide their development of as programmable site-specific gene insertion tools.

Please, join us on this Zoom link (join 5-10 minutes before the beginning)

Photos from the latest Discussions 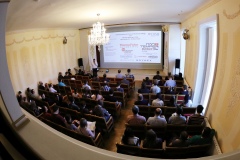